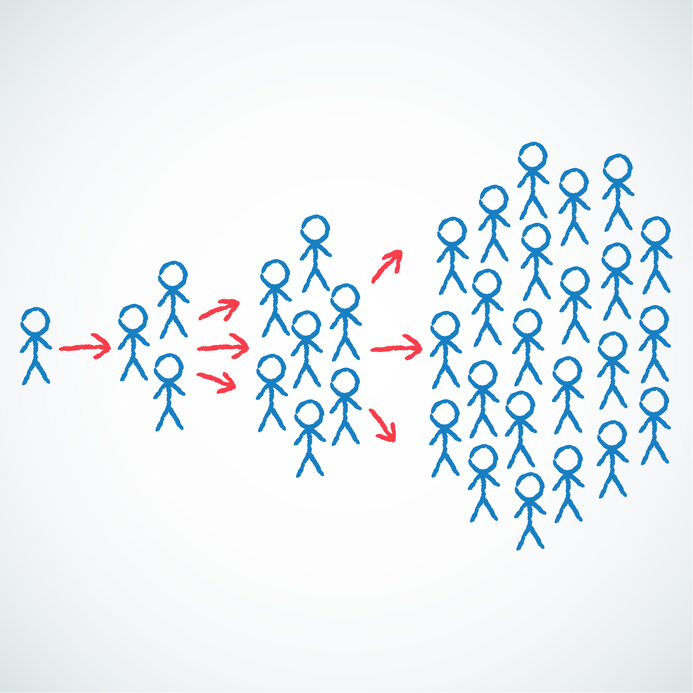 I hear it all the time. “I’m designing a viral campaign for my next video”. “I’m working on a viral strategy”. “This is going to go viral”. Or conversely i hear people think that viral videos are part of some conspiracy; “that video went viral because that was their intention all along”.
Now this post is more opinionated then most of my posts but i want to provide an alternative viewpoint and hopefully at the end of reading it you will feel better enabled to create your own viral strategies.
I’ll open with my opinion and state that viral videos, are not designed, they just happen through sheer luck. There isn’t a group of people sitting in round tables across the world pulling the strings, brainwashing us with viral content. There aren’t people that know how the world works and can control how we respond to content.
Viral content just happens, its unpredictable, out of control and chaotic.
Here’s why i think this way.
DESIGN
There first is the way content is shared. We like to share things that add value to ourselves, we like to share things that add value to other people. This could be something funny, informative or shocking. Now if we, the consumer, suspect something to be inauthentic, or tricking us into being more valuable then it is then we put our defenses up. We think we are being conned. We don’t value the content and don’t think it will have value to other people thus we won’t share it. If we see a cool video and don’t feel we are being conned or it’s fake then we share it. We feel powerful and in control. The most obvious case is If something is labeled “viral video please share” then the illusion is destroyed and we feel part of someone else plan. Thus we don’t share it.
Content is called viral for a reason: it spreads like a virus. Why do viruses spread? because we lack immunity to them. However if we see the virus coming then we can prepare immunisations against them so we have to hide our intentions.
There is a formula to how viruses spread and it’s all to do with the strength of the virus. If you have a weak virus it doesn’t matter how many people you infect with it, the virus just isn’t strong enough to cause any symptoms and won’t be passed on from person to person. Think of this like the average pop song. People will just listen to it and just think whatever. They won’t share it, talk about it or listen to it again. You can continue to advertise with more money and thus infecting more people but the song will continue to die out.
Now think of the strong virus. You infect a few people and it’s so intense that everyone they come into contact with gets infected. You have a pandemic. Think of this like the killer pop song. You could launch it in just a few places and then everyone is sharing it.
Of course pop songs aren’t the same as bird flu and there is plenty of scope for some middle ground such as where you have a good song that infects slowly but your able to see it making some impact so you can throw lots of advertising money at it. This is what record labels do. Release lots of songs and the ones that start to infect people will have more and more advertising money thrown at them so they can capitalise on the sales.
LUCK
Of course it isn’t really this easy. There are people out there like you & me creating content. Things that people will love, hate and react to. We want people to share, see or critique our work. Wether we are creating a 15 second demo on Instagram video or a massive flash mob in the desert our intent is to add value to other peoples or ourselves. We don’t really know it will go viral, we hope it does but we have no control, we don’t know for sure how people will react. We may launch and it fails to make impact but we don’t give up. We continue to create great content and then maybe, just maybe one of our pieces is in the right place at the right time.
Conspiracy
Hotline bling, i would say is the biggest viral music success of 2015. A mediocre song somehow became everyones favourite meme. It didn’t matter what scene you were into. If you love sci-fi then there were Star Wars versions of the video. If you lived in the UK you might enjoy the MR Bean versions of the video. This is a true virus a work, it adapts to it’s host so that anyone can potentially be infected. So why have i categorised this as a conspiracy? A few people in my circles believe that all this was one big design. That Drake intended for all these memes to created because he knew it would help his marketing efforts. So if it’s all part of one big plan, why doesn’t he do it again or have done it earlier? and what is so special about him? why don’t more of us have this special ability to predict the future and create viral content. Does Drake really have super powers? can he really control how we react to content
He mentioned on social media that he was initially angry with all the meme responses to his video. Many of the memes disrespect his art rather than support it. Does this anger show there were unintentional results and bad planning? or maybe this is just smoke and mirrors to energise his antagonists and continue to share the memes.
Personally i think he got lucky but i’ll let you make up your own minds.
Share
Print Post
0